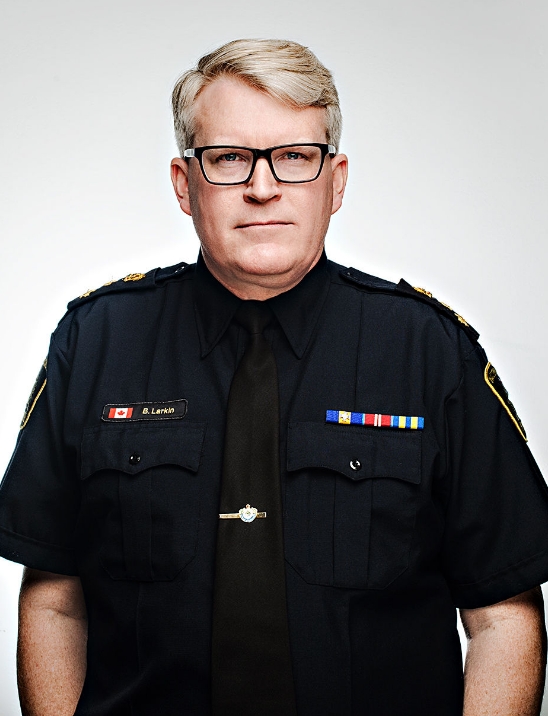 These are challenging first conversations that all of us need to have. Otherwise with 6,000 service calls a year will continue, and likely continue to grow.

With 29 years of policing experience, Bryan Larkin, Chief of Police for the Waterloo Regional Police Service (WRPS), has been a pillar in our community for nearly three decades.

Committed to strengthening community, he has a longstanding relationship with Women’s Crisis Services of Waterloo Region, dating back to the 1990s when he was a frontline officer fielding family and domestic violence calls.

Over the years, he has elicited the expertise of Women’s Crisis Services staff for guidance and advice, in addition to directly supporting various campaigns. He has also been heavily involved in partnering with the organization to build memorandums of understanding so that both agencies can work more collaboratively and seamlessly.

“I think back to the original Anselma House and how things have changed for the better,” he said. “But the one piece that’s concerning is that the need has grown.”

The WRPS has a Domestic Violence Unit dedicated to working on cases of domestic violence. Comprised of 25 specially trained officers and case managers, the unit can attest to the high prevalence of domestic abuse in our region.
“On average, we have about 6,000 calls a year – that’s 16 calls a day,” he said. “So when you think about the impact on society, some people may think ‘Is this really happening in Waterloo Region?’ Yes, this is the reality.”

Chief Larkin emphasized that these are solely the reported calls for service of a highly underreported crime.

“On average, we have about 6,000 calls a year – that’s 16 calls a day,”
So when you think about the impact on society, some people may think, ‘Is this really happening in Waterloo Region?
Yes, this is the reality.”

“The Domestic Violence Unit is going on twelve years old. We have had varied approaches to family and domestic violence,” he said. “Twelve years ago we launched a significantly different approach.”

At this time, the WRPS joined forces with the Family Violence Project, which was launched as a new, one-stop hub model that has been held as an exemplar not only in Ontario, but also nationally. By joining with several organizations in connection with the Family Violence Project, he explained they can provide better service, better victim advocacy, and better victim support to individuals who require significant change.

Chief Larkin said he is proud of the work that has been accomplished so far, but more work is still required.

“We can also start to move the pendulum towards upstream prevention, greater awareness, and really a long-term domestic and family violence prevention plan which reduces victimization,” he said.

“It’s not about raising fear. It’s not about creating chaos in the community.
It’s about bringing attention to a significant issue that has ripple impacts,” Bryan said.

Chief Larkin thinks building awareness through projects like #SheIsYourNeighbour is an important piece when it comes to prevention.

“It has been some time regionally since we have had a significant awareness campaign and prevention campaign to bring attention to family violence and domestic violence,” he said. “If you think about it, it is something that is challenging to talk about. Not a lot of families, not a lot of people, not a lot of coworkers want to talk about it.”

But as a community leader and as the Chief of Police, he emphasized that this is a problem that needs more attention. With 6,000 domestic violence calls each year, he said domestic and family violence is one of the police service’s highest priorities and one of its highest demands on services.

“We have 1,200 members and domestic violence impacts the people we work with every single day,” he said. “So I think it’s important to educate and raise awareness that this is an issue and a challenge in Waterloo Region.”

Chief Larkin explained that awareness is important because people see issues and challenges differently when they have increased knowledge. When given the necessary information, it allows them to make more educated and balanced decisions.

“It’s not about raising fear. It’s not about creating chaos in the community. It’s about bringing attention to a significant issue that has ripple impacts,” he said.

A Moment of Pause

Chief Larkin encourages community members to pause for a moment and recognize that domestic violence touches all of us.

“Regardless of your socioeconomic status, I think we all know somebody that is in a relationship that might be abusive in many different ways. It does not necessarily have to be physical. It could emotional, sexual, financial control, social control. Those are all realities and it doesn’t matter your level of affluence in the community,” said Chief Larkin.

“Through my career and in my personal life, I have known people who have family that have had challenges and domestic issues,” he said. “I think it is important for us to act. It is important to do the right thing.”

There is probably someone in your life that has been a victim, he said. Chief Larkin challenges us to ask ourselves – How did we help? Did we take action? Were we supportive?

“Hopefully, the #SheIsYourNeighbour project creates an opportunity for everybody to just press pause and reflect and think about their own personal networks. Then actually hit play again and locate what I am going to do and how I’m going to do it,” he said.

He stressed the importance of making people more comfortable with the conversation.

The Role of Police

Chief Larkin knows there is stigma, misunderstanding, and other obstacles that keeps domestic violence an underreported crime and police call. He points to commonly held beliefs of, “I don’t want to call the police because they are really busy and I’m not sure whether this is worth their time,” and, “Well, if I phone the police, they are going to get in trouble”.

“Often we will go to investigate and if nothing criminal has happened it does also allow us to make referrals to many different social agencies,” he explained. “Often, we have some different opportunities to make change.”

According to Chief Larkin, the role of police continues to evolve and it has changed locally in the last 30 years.

“Through my career and in my personal life, I have known people who have family that have had challenges and domestic issues,” he said.
“I think it is important for us to act. It is important to do the right thing.”

“Policing is really about providing a social service, we just have different tools and different options. One of them is the judicial system and our province does have different, stringent adequacy standards around family violence and domestic based investigations, and it ought to,” he said. “There should be little wiggle room in those things.”

When you look at the homicide rate locally, provincially, and nationally, a large portion and a disproportionate portion, continues to be domestic and family-based violence.

“I think it is important for us to recognize these are potentially preventable homicides, preventable deaths,” he said.

To Chief Larkin, a strong community has engaged citizens. Citizens who ask questions, who advocate for social agencies that provide support, who hold their systems leaders accountable, and who rise up as caring and empathetic leaders. If we can get all the systems leaders coming together, he says we can look at enhanced prevention programs and working to effectively save lives.

“Those are the key pieces of why #SheIsYourNeighbour is extremely important. It’s about raising awareness, but it’s also a call to action,” he said. “It’s to get all of us actually taking a little piece of responsibility and doing things differently.”

Chief Larkin has witnessed how our communities are changing, intensifying and growing. With that, our concept of a traditional neighbourhood must also adapt.

“It goes beyond the neighbour. It goes beyond the geographical factors. Take it into your workplace. Take it into your social circles. It may be at a social class, art class, gymnastics, or the hockey rink where you learn of these types of things. The concept of being a good neighbour, in my view, extends beyond street address and apartment numbers and really goes into everybody’s life,” he said.

“But also internally – with our coworkers and friends – recognizing signs and symptoms, and recognizing behaviours, and asking the right questions. These are challenging first conversations that all of us need to have,” he said. “Otherwise, the 6,000 service calls a year will continue, and likely continue to grow. We shouldn’t accept that as the norm in society. We should actively be acting to counter-balance that and to ensure gender violence isn’t part of society.”