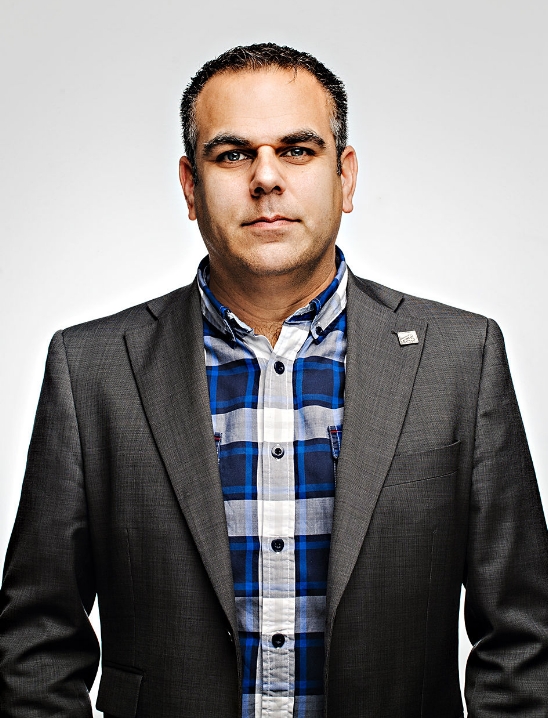 Manager of the David Johnston Research + Technology Park at the University of Waterloo, and former Director of Marketing and Community Development at the Accelerator Centre, Mike Pereira has focused his work on building bridges, particularly between Waterloo’s growing tech sector and the broader community.

His drive to strengthen community also extends to his roles as Vice President of the Board for the Association of University Research Parks and Chair of the Board for the Canadian Centre for Cyber Risk Management, as well as through his involvement with Women’s Crisis Services of Waterloo Region.

Mike was first introduced to Women’s Crisis Services about 10 years ago when his wife Kim, a Nurse Practitioner at the Kitchener Downtown Community Health Centre, began doing community outreach at Anselma House. Over the years, Mike has continued to support the Women’s Crisis Services in various ways of his own, from organizing charity golf tournaments to pitching on behalf of the organization at Communitech’s charity pitch competition, “Pitch In!”

Through his involvement with Women’s Crisis Services, Mike has learned how domestic violence is impacting Waterloo Region.

“It’s one of those problems that I think doesn’t get talked about enough. It tends to fly under the radar, especially in terms of things like volunteerism, giving, and people’s general attention to the topic,” said Mike.

Mike believes one reason domestic violence does not get the attention it warrants is because people don’t understand how prevalent it is.

“I think it’s way too easy for it to be overlooked because people really are not aware that it’s regularly happening in their own community,” he said. “But not knowing about it does not mean it’s not happening.”

For those who do recognize the prevalence of domestic violence it can feel overwhelming, says Mike.

“I think it’s way too easy for it to be overlooked because people really are not aware that it’s regularly happening in their own community,”

“I think a lot of people really have no sense of how to deal with it and how to combat it. They feel like, if you can’t see a problem then how do you deal with the problem? And even if you can see it, do you know what to do about it?” he said. “For example, I have some really wonderful friends that I’ve known for 20 to 30 years and I really don’t know how I would respond if one of their wives, who I am now also close with, told me they were being abused,” he said.

“It would be so challenging to really wrap your head around. How would you respond to that situation? I think that makes people feel really powerless and it makes it really hard for them because they just don’t want to think about it,” he said.

Mike believes we need to start by accepting that there is no simple solution.

“I think one of the big things is that people need to get more comfortable with the fact that it’s okay not to figure out everything right away. If this were an easy problem to solve, we would have solved it by now but it’s a very complicated problem. It’s okay that you don’t know how to fix it, but it’s not okay to ignore it,” he said.

He encourages people to break the issue down to a personal level.

“Try to figure out what little things you can do to fix the problem in your own world, without having to take on the institutional level or societal level problem. To say ‘I’m going to be responsible for the things that are within my grasp’,” he said.

As a leader within Waterloo Region’s tech sector, Mike shared several examples of small ways he has taken action to speak out and raise awareness about domestic violence. He focused a week of the Research Park’s newsletter on events surrounding International Women’s Day.

“…let’s be honest, a lot of it is perpetrated by men. And to me that means there’s a role for men to play in putting a stop to it.”

“Our newsletter is not huge but we’ve got almost four hundred subscribers and they’re all people in tech who maybe don’t even know how big the problem really is, so for all I know that was their first exposure to it,” he said.

The newsletter included an article indicating local women’s organizations that employees could consider learning more about and even donating to. He says making a donation is one simple way you can make a difference.

Another step is to start raising awareness within your ‘world’, Mike says.

“There is also abuse in the workplace. Something I can do from a tech standpoint, and one of the things I want to do in my role as managing a business community, is bringing that community side to it,” he said. “To have talks about good management and good leadership, and making people feel safe coming to work.”

Your ‘world’ can also extend to the online word. Mike suggests people can use their social media platforms to speak out, share relevant news articles, and show their support.

This is something Mike does regularly. For example, when CBC KW published a story about Waterloo Region being the least safe place for women, Mike shared the article on Twitter and stated that we have a lot of work to do in our community. He then proceeded to offer some ideas, particularly to other men, about where this work might start.

“At the end of the day, women are already doing this work, they don’t need me to say anything about what the work looks like,” he said. “So I’m going to make it focused on what I think most of the men in the community can be doing.”

A Role for Men to Play

Men can start by becoming more mindful, he explained.

“I need to acknowledge that my experience is not universal. I feel safe right now but maybe the person in front of me doesn’t,” said Mike.

“I need to acknowledge that my experience is not universal. I feel safe right now but maybe the person in front of me doesn’t,”

He shared a story of how he learned this lesson, from a seemingly small moment that had a significant impact on him. One evening he was walking home from a conference and really scared a woman who had been walking six feet in front of him when he cleared his throat. Although completely unintentional, her strong, defensive reaction made him realize he probably should not have been following behind as close that late in the evening.

“It’s one of those things where it’s like, how easy is it to just be more mindful of what’s going on around you and to understand that maybe not everybody feels your sense of security and safety in the community?” he said. “So how can you help by creating space and being mindful of how other people might be experiencing the environment that you are in?”

Mike suggests people can use their power, privilege, and position in society to find feasible ways to help create change.

“What are those things that you can do that are not seemingly overwhelming steps to make your contribution to change the status quo? So that it becomes less big, hard, and overwhelming of a societal problem we will never get to,’ said Mike. “All of those things change as you start to change your own outlook and attitudes. If enough people take those little steps they become much bigger steps at a much different level.”

Mike sees that offering his voice presents some challenges.

“It’s an interesting thing that I think a lot about: between being a voice and amplifying other voices. There is part of it where you are like, “Why my voice? Shouldn’t it be someone else?” But then you sit back and go, well then I’m not talking about it and that’s just as bad. Sometimes you also have to lend your voice to that chorus,” he said.

He believes that as community members, we all have a role to play in being “good neighbours.”

“All of us have this sense that we know our neighbours, we are close with them and we connect. Yet statistically it is reasonable to assume that someone in your neighbourhood, someone that you know, is being abused and you just don’t know about it,” said Mike.

Mike points out that we often rely on our neighbours for things like shoveling each other’s driveways, or getting together for potluck dinners, but asks us to consider whether our neighbours would feel like they could come to us for help if they were in an abusive relationship?

“It’s much better if we have open conversations so people have that sense that they can confide in you about what’s happening,”

“If it were happening, are you a person that would help others feel comfortable? Would you listen to them, believe them, help them, and keep them safe? If you are not seeing yourself as that person, how do you feel about that and what can you do to change that?” he challenged.

Would you be understanding and withhold judgement? Would you consider the complexity of their situation?

“There are a lot of barriers to leaving. I think we often undermine how significant that is,” Mike said. “They are not just walking away from this singular toxic influence, its potentially walking away from their whole family who may not understand, their community, their kids, giving up a home you built.”

For Mike, being more open and understanding is key. He suggests that we need to create a more open dialogue and let those around us know that the subject is not off-limits.