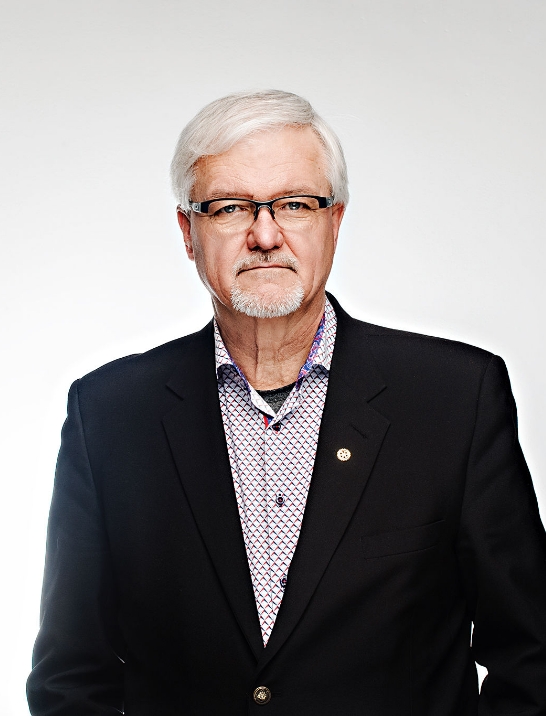 I'm a prime example of the need to educate. I had a misconception of what domestic violence really was.

Leo Tobi is passionate about community. No matter what he is working on, he wants to see people striving and thriving. This carries over to his role with the KW Titans as well as the new direction he has taken professionally which he describes as, “a new journey, one that merges my passion and talents.”

Leo works as a Relationship Management expert and Motivational Sales Leader. He has also been involved in the Kitchener-Waterloo Rotary Club for approximately seven years which supports community endeavours and organizations.

“The nice thing about Rotary is that you’re not in it by yourself. Collectively, as a group of Rotarians, we have a lot more power when we band together and share time and resources to do good in the community,” he said.

The club raises funds in a number of different ways which they distribute to community groups. “We can write cheques to organizations, such as Women’s Crisis Services or KidsAbility, anything that is a community asset that requires funding and investment,” he explained.

It was through Leo’s passion for community that he was first introduced to Women’s Crisis Services. A friend, Harmony Voisin, asked him to join a planning committee for a golf tournament that would raise funds for the organization. This began his journey of learning about domestic violence.

“I really became aware of the organization’s work and need for support my second year on the golf committee. That year, we were invited to host the first golf committee meeting at Anselma House so that we understood what it is that we’re supporting. For me, it was a very emotional experience,” he said. “It was quite visceral and shocking for me to realize that there is such a big need.”

Visiting one of the shelters and learning more about the services offered to the residents was a transformative experience for Leo. “I feel passionate about what you do. It’s sad that it’s required. But it affects me emotionally and rather than just sit in the corner, I want to do something about it. So whatever I can do with the time that I have, that’s what I want to do,” he said.

For Leo, this has evolved into working with the organization in many capacities, such as attracting sponsors for fundraisers, providing services and sponsorship, advocating for other men to become involved, and connecting other community entities to Women’s Crisis Services.

“Just the mere fact that it’s so prevalent – we’re at capacity in two different shelters in our region – speaks to the need for education. I think this is a key element that is missing. You can’t use hush tones. Let’s talk about it openly. I mean, that’s how you educate the masses. Don’t hide. Be open,” he said.

Leo believes that education and awareness are crucial.

“I’m a prime example of the need to educate. I had a misconception of what domestic violence really was,” he explained.

“It is experienced by a large range of people and there are so many types: emotional, physical, psychological, spiritual, and financial,”

“When the phrase ‘domestic violence’ entered a conversation, I immediately had images of battered women, women from mostly lower socio-economic situations. We know that that’s not the case. My perception was both naive and a sheltered point of view,” he said.
He now understands that domestic abuse does not discriminate. “It is experienced by a large range of people and there are so many types: emotional, physical, psychological, spiritual, and financial,” he said.

Leo was also unaware of how domestic violence affects children. He learned that at any given time, almost half of the residents at Anselma House and Haven House are children.
“That’s what really saddened me years ago, that there were almost as many children as women in need,” he said.

A Call for Male Advocates

Although Leo is frustrated about the extensive need for domestic violence shelter and services locally, he has chosen to channel those feelings into a commitment to advocating for women.

“As a man, I believe I would be one of the first to respond to a female being mistreated in my presence. I don’t have any compunction at all for not supporting, recommending or advocating to other men to do likewise,” he said.

“Being exposed to it forces you to contemplate and think about how you can help this person and what services or organizations are there to do so,”

Back in the early to mid-70s, a cousin of mine from Toronto was dating this fellow at a church camp. I happened to be there when she was very upset,” he said. Realizing that it was the man that was upsetting her, he made a point of being there for his cousin until the man left.

“That was the closest I think I’ve come myself personally,” he said. He realizes that although this is a fortunate situation, it had also left him naive to the realities of domestic violence for a large portion of his life.

“Being exposed to it forces you to contemplate and think about how you can help this person and what services or organizations are there to do so,” he explained.

He challenges all men to take a stand even if they don’t think they know someone who has been personally affected.

“If you’re a male in Waterloo Region and you care about the women in your life, consider what would happen if one of your loved ones – whether it was a daughter, sister, or whoever – was affected by domestic violence in whatever form it takes. Would you do something about it? Well, here’s your chance. You can do something about it now by learning more about Women’s Crisis Services, and educating yourself and other men to do the same. Education alone allows you to recognize opportunities to help,” he said.

Leo believes that overcoming domestic abuse will require a united front. “It’s a community problem. It’s not just an individual problem,” he said.

“If we are educated and if we recognize the various forms of domestic violence, like my eyes have been opened, then as a good neighbor, we can do something about it,” he said. “Whether it’s to direct those affected or simply advise those who we may come in contact with, that there is safety and shelter and help that can be provided by trained professionals.”

“Wouldn’t it be a much better place, a much better Waterloo Region, if Women’s Crisis Services was not needed as a service center in our community?”

“They’re all willing to help in whatever way they can to assist, find talent, invest, advocate, or volunteer, all to ensure that our community leaves a legacy as a great place to live, work and play,” he said.

Once you have a better understanding of domestic violence, Leo said you can begin viewing situations in a new light, with a heightened awareness of signs and red flags to look out for. He said it is important that support and guidance is offered in a non-judgemental manner.

“I’m here to help. Let me see if I have the resources that I can help you. I think that’s what it’s about. That’s what being a good neighbor is, looking out for one another,” he said.